MAI is uniquely equipped and positioned to share the good news of Jesus Christ around the world, including several regions restricted to traditional efforts. Since its inception, MAI has partnered with like-minded churches and organizations across the globe to create soccer ministry opportunities for hundreds of coaches and teams, and thousands of players. These opportunities include Coaches Trainings and Short-term trips, or tours, for players.  We train these coaches and players by combining excellence in soccer, authentic community and our own unique sports ministry training curriculum. This is done in a context that encourages and serves ongoing overseas sports ministry initiatives. Through our international tours and training, MAI desires to generate teams of influential coaches and players who impact lives and inspire people to flourish in and for Christ wherever they are planted. 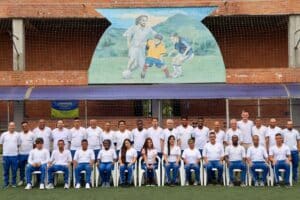 The Christian Union Sports Club (CUSC) (in Colombia known as the “Social and Sport Corporation of Colombia”–COSDECOL), officially founded in 1991 in Medellín, evolved out of a neighborhood soccer tournament that was organized as a way to reach out to young men who were being recruited into the life of violence and crime spawned by the Medellín Drug Cartel.  Mark Wittig, an American who arrived in Medellín in 1986 with his family to teach at a university/seminary, founded the tournament along with other local friends.

A young leader from the neighborhood, a participant in the tournament, turned his back on the “cartel life” and began to work with Mark in developing a soccer program for adolescents.  While Alvaro Cano would coach the team of young soccer players, Mark would teach them values and principles from the Word of God.   Out of this initial group several became Christians and entered a period of discipleship with Alvaro and Mark.  They later became coaches in the program, and more teams were organized in other neighborhoods of the city.  Over a process of time, the CUSC grew and today has 32 full-time and part-time staff, 130 soccer teams with 3,400 participants from the poorest neighborhoods of the city, a citywide soccer league, a brownie, cookie and cake business that employs 28 young people full-time, and a developing sports and retreat facility. The CUSC has also established sports programs in sixteen vulnerable areas of the country, mainly rural.

Give Now
Go to Top