The Secret of Sports Ministry: Lessons from Japan 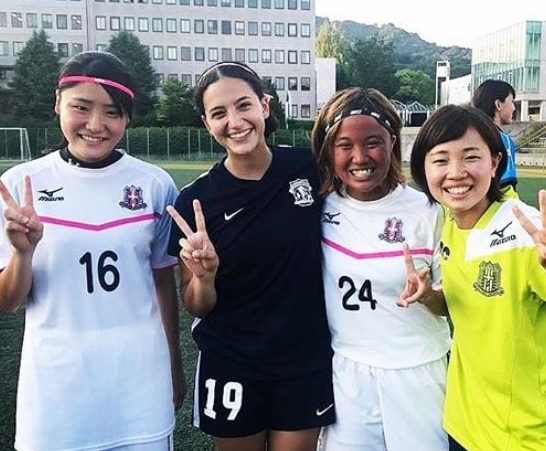 College friends wore our fundraiser T-shirts around campus. Team parents praised us for flying across the world to spread the gospel. In Japan, we were guests of honor. Local pastors advertised the visiting American athletes to draw people to church. Groups of teen girls wanted to pose with us for selfies. We were celebrities.

This attention made us feel we had to accomplish something—by evangelizing on the streets or building a house or digging a well. When I was on a missions trip in Ecuador, we built a church roof in a mountainous village that was filled with poverty. The pastor couldn’t afford manual laborers, so we worked with our hands, and  provided rebar and metal sheeting. When done, we could see what we had built. Ecuador is a developing nation, but Japan is an economical and technological giant. The Japanese don’t need care packages or mosquito nets. They would get along just fine without us. It was hard to see the difference we could make.

During our first week in Japan, I wasn’t the only one who wondered how playing soccer and singing “Bananas For My Lord” to bleachers full of strangers could be considered evangelism. Although soccer was our platform for ministry, my teammates imported their own ideas of what a missions trip should look like based on other missions trips they had experienced or heard about..

One night, as we got dressed after an hour in the Japanese spa, one of my teammates asked, “Do you ever wonder what we’re really doing over here? How are we helping anyone?” Other girls nodded in agreement. It was true. With the language barrier, we could never get beyond superficial relationships with the Japanese people. Even a lighthearted conversation about Justin Bieber or sightseeing in Los Angeles was exhausting and irksome. Any theological discussion was impossible. Our conversation about these frustrations spilled over to the van ride back to the church where we were staying.

Paul Gizzi was our missions trip leader. He had been a professional goalkeeper with the Seattle Sounders and the San Jose Earthquakes. He grew up in Japan, so he spoke the language fluently. Today, he is a distinguished, white-haired 60-something man with a deep tan and a broad smile. When he speaks, he goes on wise tangents, and you don’t want him to stop. He is the kind of warm elder you wish was your grandpa. Tonight, he was sitting at the front of the bus and he overheard our discussion.

He told us he knew what we meant. For years, he harbored doubts about the efficacy of Seahorse’s missions to Japan, even after more than a decade of leading trips there. But he prayed and begged God to let him know if the ministry was making a difference. “I was blown away,” he said. “There was fruit that I was not even aware of.  The Lord reminded me that our job is to be faithful and leave the results of ministry to him.” God showed him that he could use even our smallest cross-cultural gestures (like our scrimmages, our meals together, and our halting attempts) to connect. Soccer was what we had, so soccer was what God used.

Gizzi once told me, Soccer has become the second most popular sport in Japan behind baseball. Japan has been first or second in women’s soccer for the past couple World Cups, right behind or ahead of the U.S. women. This makes for a very interesting platform from which to engage the Japanese about who we are and why Christianity provides the answers to many of life’s questions. Our sports ministry used this popularity to appeal to a wide swath of Japanese people. College girls, school children, businessmen, and grandparents crowded the sidelines—people who wouldn’t normally come near a church. But local pastors were there in the crowd as well. Our games and clinics proved an effective way of forging introductions that might not have happened otherwise.

The year Gizzi asked God to show him the ministry’s effects, God brought him a few examples. “In Iwata, a family introduced themselves to me and asked if I remembered them,” Gizzi told me. “I didn’t. The father told me he’d become a believer back in 1996 when our team came to Nagoya and played against his college team.” This was a total surprise for Gizzi. The Lord didn’t waste time in assuring me that there was fruit, and I didn’t need to know it existed.”

Why was it so hard for even a missionary like Gizzi to see the ministry’s impact, though? I think it’s because relationships are integral to evangelism. We need to invest time and gain understanding to build a foundation of trust before our words will make a difference. This is not easy to do when you are in a country for only eleven days.

It can be frustrating for those of us who know the truth of the gospel to see how long it takes for the Japanese to even consider our message. Only one percent of the Japanese population is Christian. The vast majority are Buddhists or nominal Shintoists. They need the gospel as much as any poverty-stricken country in Africa, South America, or Asia. But how were we supposed to bring them to a new faith through a single soccer match? Sports ministry seems designed for instant results, but this is not realistic—and that’s what Gizzi helped us understand. Placing myself in the Japanese’s cleats, I saw how essential friendship is to spiritual matters. What would I do if a Muslim team played soccer with us for ninety minutes and then gave us his or her testimony? How likely would any of us be to reject everything we have known our whole lives to accept some new belief?

What, then, was the point of our short-term trip? To put it bluntly: We were the bait to attract the Japanese, and the pastors and long-term missionaries were the ones responsible for evangelism and fostering deeper relationships. “Soccer ministry, though slow, is a very natural way to plant relationships. It does not offend the people, but rather becomes an attractive way to engage them with the Japanese church they otherwise wouldn’t consider attending,” Gizzi explained. With this truth, I unburdened myself of my delusions and embraced my humble role in God’s mission.

Of course, soccer is not the only playing field for missions. Any sport or artistic endeavor—whether singing show tunes, shaping pottery, or designing comic books—can provide this first contact with Christianity. God is creative and has given us an array of gifts and passions so that we can be creative and use these talents to lead people to Christ. My Biola team loves soccer, so we used our gift as our medium. That night, after we had our discussion in the van, we arrived back at the church where we were sleeping. As we were getting off the van, I overheard Gizzi tell our assistant coach Katie that he had one more meeting. My ears pricked up. It was late, and Gizzi was worn out. “It’s someone we met last time we were here,” he told me. “Her name is Hiromi. She just wanted to meet for a while to catch up.” He seemed so tired, but here he was, making his long day even longer. “We’re going to meet down at the 7-Eleven and grab some ice cream,” he told me, suppressing a yawn. He continued:

She is the mother of a young man we connected with when his sister played against a Seahorse team. He had just come along to watch. Once we saw how good he was, we invited him, his sister, and his mom back to visit us at the local Japanese church. We invited them to come to the U.S. sometime. We made that happen and began a relationship that resulted in Hiromi and her son attending our camps and games. Her son eventually accepted Jesus Christ as his Savior.I saw Gizzi the next morning at the team breakfast, and he filled me in. When Hiromi had heard the Seahorse soccer team was staying at Pastor BJ’s church again this summer, she wanted to see Gizzi. She was still Buddhist—it is, after all, Japan’s most popular religion—but she was curious about Christianity since her son’s conversion. She took this opportunity to seek out Gizzi’s guidance. “How do you know that Jesus is God?” she had asked him over scoops of Häagen-Dazs. “How can I follow him if that means I have to reject my family’s religion?” Gizzi’s faithfulness in their relationship, even in his small sacrifice of sleep, continued to inch Hiromi nearer to an understanding of Christianity. She wasn’t yet a believer, but again, a small stone we’d tossed in the water during our brief visit had sent out wide ripples.

Regardless of the lack of immediate results, I am confident that my soccer team did accomplish triumphs in Japan. However, my faith does not rely on my team’s efforts or outstanding qualities, or in tangible results. God used my team to demonstrate his love to the Japanese. Results were invisible because God worked within their hearts at whatever stage they were at in their slow journey towards Christ.

Similarly, my short-term missions team did not need to worry about what fruit would spring from our sports ministry. We simply needed to rest in God’s goodness and humbly obey our task. God called Biola’s women’s soccer team to play our beloved sport with strangers in Japan, and he equally calls others to use their own talents to share Christ’s love and truth with the world.

Bri Mikalson lives in Long Beach. She was a junior at Biola University, where she played soccer for the women’s team. She was a Torrey Honors Institute student and English writing major. She loves reading, going to the beach, learning about other cultures, and traveling.

Tracing the Roots, the History and the Legend of the Seahorses
July 1, 2017